Years ago, a girl who worked with me introduced me to the work of a woman named Louise Hay. Linda was leaving our company and I remember going to Barnes and Noble to buy her a going away gift of some of Louise’s books, because she often talked about how much her work had helped her. Even after that endorsement, I wouldn’t take a real look at anything Louise had written for years.

I can’t exactly recall how it happened, but I was reminded of her again just before or just after I discovered the idea that coaching might be a way for me to move forward after Katrina.  First, someone else I knew said, “Have you read anything by Louise Hay?” And then a few weeks later, my first coach quoted Louise in a session. She then told me that Louise had an online radio station called Hay House Radio and it featured a coach whose work I also admired, Cheryl Richardson, and a guy whose work I had discovered in college named Wayne Dyer. She said, “If you’re willing to take a look at this, let’s talk about it next week and how it might speak to your current dissatisfaction with what you’re doing.”

To say I looked is an understatement. I devoured Hay House Radio and ordered one of her books. I downloaded podcasts featuring all of them and listened whenever I was in the car. They all said things I had no doubt heard before, but that at a time that I wasn’t really listening the way I was then. I was ready. It was time to change my thoughts and to change my life.

Where I am today in my work and in my beliefs about myself are like night and day. My thoughts aren’t perfectly positive every day – in fact, far from it! I’m just more aware of them most days. Some days are still crumple and cry days for sure. But I’m always moving forward…always equipped with this one key to success. Thoughts are things. What you think about comes about. Because when you change your thoughts, you change the way you feel. And when you change the way you feel, your level of self love, happiness, presence, and belief and hope changes the way everything else unfolds for you.

I’d heard these concepts in church when I was a child, but the way these teachers described these concepts made it all connect for me. It wasn’t woo woo or metaphysical to me, but a practical application of the same principles that had been written and practiced by thought leaders, disciples, priests and kings.

I began gratitude journaling daily. I repeated daily affirmations as a way of taking what I used to think of as prayer into a whole new level. I learned that believing something could happen was the first step, followed by actions, and then miracles would follow. And they have.

Wayne died two years ago yesterday, leaving behind a legacy of written and spoken words.

Louise died yesterday at the age of 90. Exactly two years to the day after we lost Wayne. They were colleagues, friends, and faithful supporters of each other’s work. I can’t imagine their joy at being reunited again.

If you’ve never picked up one of Louise’s books (or Wayne’s)  or listened to one of her audio or video presentations, I encourage you to do so. Her life story is incredible to hear.

But today, I just want to take a moment to use my words to honor a woman I never met and to be grateful for all that she was to me. To say that she changed my life is also an understatement. My 4 Elements for Success are based on these principles that I learned and used to create my business. I wouldn’t be where I am today, sitting on my couch in a home that is perfect for me doing work that I love more than anything I’ve ever done, without the wisdom this woman shared with me and with the world. 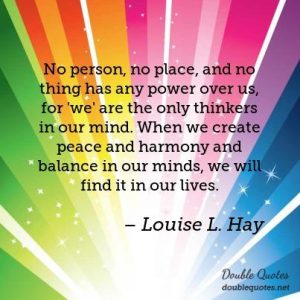